Skip to content
HomeAlbum Review #3: Tragic Songs of Life by The Louvin Brothers (1956) 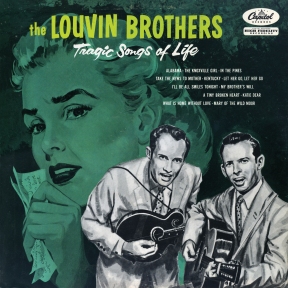 I’m going to be perfectly honest; this album left me underwhelmed. While there were a few things that I enjoyed about it, it just seemed a little… bland. The different tracks just sounded like each other, and while the lyrics were generally pretty good, the music itself was just lacking.

The Louvin Brothers are considerably big names in the world of Country. Tragic Songs of Life is thought of as a landmark album in the genre, along with their 1959 record Satan is Real. However, while I can see the importance of this album, it just didn’t make that much of an impression on me. I’m not that experienced in the genre of Country music, but I still enjoy it as much as I enjoy pretty much any other music; I have always held the belief that there is amazing music to be found in every genre. The guitar is enjoyable to listen to, particularly the riffs usually kicking off each song, and Charlie and Iva’s vocal harmonies are admittedly incredible; I would go as far to say that the singing is by far the best part of the record. However, the Brothers’ personal lives prove to be much more interesting than the music itself.

You see, Iva “Louvin” Loudermilk was what you would call an incredibly unstable human being. An extreme alcoholic and womanizer with borderline dangerous anger issues, his flaws were so severe that it was sometimes even dangerous to work with him. His behavior reached a horrifying peak when he attempted to strangle his third wife with a phone cord, which prompted her to shoot him multiple times in the chest in self-defense. Miraculously, after a presumably long time in recovery, he survived. In 1963, his brother Charlie finally decided to split with his brother and start a solo career, distancing himself from Iva. Two years later in 1965, Iva was struck and killed by a drunk driver. Ironically, Iva was currently wanted on a DUI charge.

So with all of this as a backdrop, it’s a little bit jarring to listen to the album and hear such stable, calm and traditional songs. Even if the lyrics are occasionally very dark (“Knoxville Girl” is particularly messed up, coldly and casually recounting a murder, and with pretty much no explanation as to why) the sound of the music itself really offsets that. The emotions being expressed through the lyrics are just cancelled out by the frankly dull instrumentals.

Overall, I didn’t enjoy this album. The songs just didn’t sound that inspired, and while the singing and harmony itself was excellent, the rest just doesn’t seem to meet the same quality. The songs all seem to sound similar to each other, and even if the lyrics are often good, it really doesn’t make up for the negatives. If you aren’t a diehard Country fan, I wouldn’t recommend this album.

One thought on “Album Review #3: Tragic Songs of Life by The Louvin Brothers (1956)”