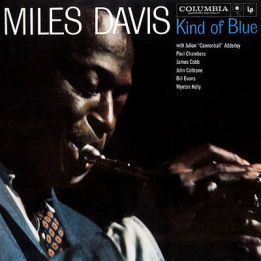 This right here is a turning point, folks. Miles Davis’ Kind of Blue is not only the highest selling jazz album of all time (currently at 4x Platinum according to the RIAA), it also had an incalculable influence on almost every other genre of music for decades to come. I’ve been a pretty big fan of this album for quite a while now, and while I still prefer his 1970 release Bitches Brew, it still stands as a hugely important masterpiece in its own right.

With the help of a ridiculously star-studded cast of session musicians, including piano virtuoso Bill Evans and jazz legend John Coltrane, this set of five mostly-improvised jazz compositions becomes absolutely incomparable in performance, melody and sound. The record opens up with “So What,” containing one of the greatest introductions in music history.  The piano and bass play off each other excellently, and the moment where the cymbal crashes and the song goes into full swing is just pure perfection. The following track, “Freddie Freeloader,” continues the great improvised playing and harmonies, but track three, “Blue in Green,” is just indescribable. Evans’ piano playing is at its peak in this track, and gives off a mournful, even otherworldly vibe. My only complaint is that it is the album’s shortest track, at only five minutes. Its a song I definitely wouldn’t mind listening to for longer.

Photo from the Kind of Blue sessions. Source: NPR.com

After “Blue in Green” comes the album’s lengthiest track, “All Blues.” This one’s probably my favorite out of the five. It may be long, but the great (as usual) performances, with repeating drum/high hat and bass that persists throughout, providing a sort of base for the trumpet, sax and piano to do their thing. It just keeps going for 11 straight minutes, and doesn’t wear out for even a second. It’s followed by the album’s closing track, “Flamenco Sketches.” An excellent send-off for one of music’s great masterpieces, it’s slow, morose and calming, and takes its time serenading the listener with latin-inspired melodies in some of the most smooth nine minutes of jazz ever put to record.

If you haven’t listened to Kind of Blue yet, do it. Now. I mean it. Simply one of the finest jazz albums ever, it’s something everyone should experience at some point in their lives. Never once feeling flashy or over the top, it remains cool and subtle throughout, making a lasting impression without ever raising its voice. Do yourself a favor and listen to this one.

Favorite Tracks: Uhh… Can I just say all of them?

Next Up: Gunfighter Ballads and Trail Songs by Marty Robbins (1959)