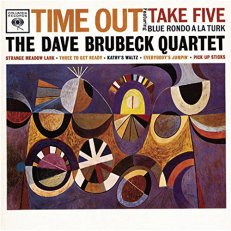 The Dave Brubeck Quartet’s Take Five is the final album of the book’s 50’s section, being released in December of 1959, and oh boy, does it end the decade on a high note. This is an excellent jazz album, rivaling the likes of Brilliant Corners and even Kind of Blue. Featuring only four musicians and yet at times sounding like a full orchestra, this album is extravagant, and at the same time subtle, with expert musicianship shining through each and every second. I think it’s needless to say that I enjoyed this one greatly.

The track that pretty much everyone knows this album for (and by extent, Brubeck’s entire oeuvre,) has to be “Take Five.” If you’ve never even heard of Dave Brubeck, you’ve probably heard this song at some point, possibly without even knowing it. It’s a great melody, but what I like the song even more for is the rhythmic, persistent piano that serves as a sort of grounding point for the rest of the band to do its thing. Funnily enough, the iconic saxophone melody that the song is famous for only appears at the beginning and very end of the piece, with the bulk of the song being an extended drum solo, accompanied by piano and bass. With such sparse instrumentation and such a (relatively) long running time, you’d think the song would tire itself out before it ends, but it doesn’t. Joe Morello, the percussionist, is so talented that he easily carries the majority of the song on his own. Although I love the song, I have to admit that it’s a wonder the song became a major hit, being over five minutes long and about %70 drum solo. Good on the public for digging this song so much. 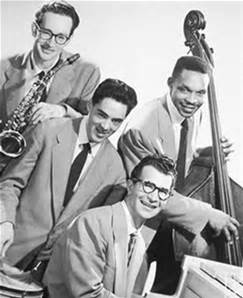 But of course, “Take Five” isn’t the whole album. There are six other tracks that make up the record, and all of them are worth mentioning. My favorite of these is track number two, “Strange Meadow Lark.” It has an incredible introduction, with a little over two minutes worth of solo piano that I can only describe as “Gershwin meets Debussy.” Brubeck is truly talented with the piano, and it shines here more so than anywhere else on the album. The rest of the band is great as well, with the four instruments working together excellently to create a soothing, cool and highly relaxing mood for the remainder of the track’s seven minutes. More so than any other track (which is saying quite a lot), this one is simply a goldmine of pure, undiluted ear candy.

Time Out is truly a top-tier jazz album. The playing is masterful, the melodies are memorable and the freestyles are flowing and effortless. The Dave Brubeck Quartet was one of the 50’s greatest jazz combos, and this album is their crowning achievement. Give this one a listen, it deserves it. 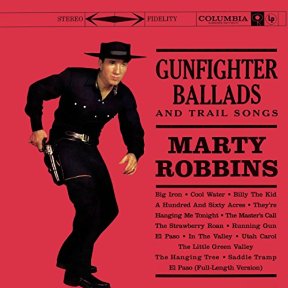 I feel bad for people who don’t listen to country. The genre has such a stigma surrounding it for some reason, which confounds me, with the wealth of great country music that there is. Writing off an entire genre of anything is a terrible thing to do. My personal belief is that there’s great music to be found in every genre, so for all the country haters out there, Gunfighter Ballads and Trail Songs by Marty Robbins is proof of that theorem.

The title is accurate; every track is either a story-song about outlaws and shootouts, or a campfire folk song about the daily struggle. Marty Robbins has a good singing voice, and his band is a good accompaniment to his lyrics. He’s got a classic country croon, clean and almost never faltering on a tone. It’s simple, but it works. In fact, I’d say that that can describe the album as a whole: simple but good. The melodies are uncomplicated and difficult not to sing along to, and the instrumentation is minimal, with the only instrument other than guitar, bass and drums appearing on the album being a brief fiddle intro to “Cool Water.” He does more than well with what little he has to work with, making each and every track an engaging listen. 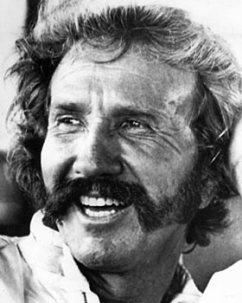 While the music itself is great, the album’s true strongpoint is the lyrics. Marty Robbins himself only has a writing credit on four of the album’s twelve tracks, with the others being either covers of fellow country artists or traditional folk songs, but he still infuses both his own songs and his covers with equal love and attention. My favorite tracks still tend toward Robbins originals, however. “Big Iron” starts the album off on a high note, and “In the Valley” is soulful and moving, with the only negative I can come up with being that it’s too short, at only 1:48. “The Master’s Call” is the only one of the four I don’t like; the lyrics are good, but musically it’s almost identical to “Big Iron,” just in a different key. The best track of the album has to be “El Paso.” With great lyrics, excellent guitar playing, and the catchiest melody of the record, it was his biggest hit for good reason. It’s a truly classic song, and one every country fan should hear.

If you don’t like country, that’s fine. Different strokes for different folks. Heck, I wrote possibly my most scathing review yet on Tragic Songs of Life by The Louvin Brothers, the first country album on this list. But that isn’t to say you should dismiss the entire genre. As I said before, there’s great music everywhere. If you dislike a certain genre, you just have to dig a little more for it. I’m almost certain you’ll find it somewhere. And if you dislike country, Gunfighter Ballads and Trail Songs just might be the one to change your mind.