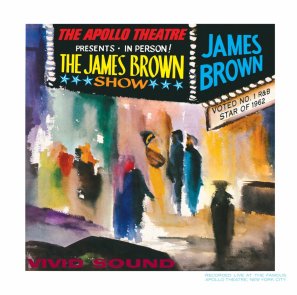 I’m back, everyone! Terribly sorry about the unannounced hiatus. I fully intend on making my posts much more frequent than they have been.

James Brown was known as “the hardest working man in show buisness.” After all, he played a gig almost every single night, (and sometimes even multiple times in a single day,) and the concept of a “break” was pretty much completely alien to him. So for a single 30-minute concert, performed at the Apollo Theater in 1962, to consistently rise above all other sets of the man’s entire career and frequently place on lists of “greatest live albums ever”, it has to be something truly special. Well, worry not, because this album more than lives up to the endless hype. You know you’ve got a hell of an album on your hands when the only complaint you can think of regarding it is that it’s just too short. At just over 32 minutes, it almost always leaves the listener unsatisfied and wanting more. But hey, an album sure can do worse when its only drawback is that there just isn’t enough of it.

The album starts with a passionate intro from Fats Gonder. He lists off all the songs on the setlist, each one punctuated by a burst of brass that increases in pitch each successive time, creating an awesome sense of buildup and anticipation. After his opening, the band launches into a cool yet crazy-energetic instrumental, with the guitar alternating with the brass section with a great call-and-response style. After a minute of this, the man himself, James Brown, steps up to the microphone and screams out the opening lines to the first song, “I’ll Go Crazy,” with an astonishing raw power only he could pull off. The guitar strums out the opening chords, before the song finally kicks off with hypnotic arpeggios and excellent singing from both Brown and his underrated backup singers. This is probably the single catchiest song on the record, with flawless hooks, melodies, and instrumentals that all work together perfectly to create what is possibly the perfect R&B song. They then seamlessly transition into the next track, “Try Me,” which is much more subdued and calm, but still just as enjoyable as the first. Putting these two tracks right next to each other does a great job of emphasizing Brown’s emotional range: he can sing and scream the loud-and-exciting songs and soulful-and-tender songs with equal effortless proficiency. From this track until the end of the side, there is a brief ten-second bridge between each song performed by the brass section that really serves to maintain the momentum between each song. Because of this, the whole side feels like a sort of epic suite, with even the quiet and calm tracks acquiring a feeling of tension and anticipation. After “Try Me” comes “Think,” a short and rambunctious song with a chaotic rhythm and a jaw-dropping sense of power throughout. Brown’s vocals on this track are barely-coherent and really come off as more of a background to the instruments—unusual for this album, as his singing is usually so demanding of attention that he becomes the centerpiece of any one song—but honestly, in this instance, it really works. His vocals here perfectly complement the unhinged nature of the track. Next comes another slow ballad, “I Don’t Mind,” opening with a very understated, barely audible organ in the background that gives the song a strange, calming-yet-tense vibe that really makes the track stand out among the rest. As always, Brown’s vocals make the song, with an impressive level of sheer intensity delivered in a quiet tone. Even when he brings out the trademark scream, it’s quiet and incredibly controlled. This whole track is, simply put, a masterclass in restraint. 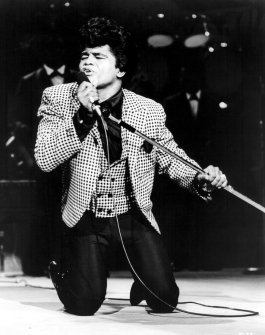 The album’s second half kicks off with the showstopper, the ten-minute soulful blues jam, “Lost Someone.” This is the reason this album is still remembered all these years later, and is frankly worth the price of admission alone. It’s incredible length (which, by the way, is a third of the entire album’s running time) doesn’t hold it down at all: in fact I would argue that it wouldn’t even work with a shorter time frame. It’s an excellent example of repetition in music done right. The band plays, for the most part, the same bassline and trumpet part repeatedly, but with minute variations that keep it engaging, and, of course, James Brown’s once again jaw-dropping vocal performance. His voice really does carry this entire album, and on this track especially he imbues every line with passion. His singing is captivating, emotional, and engaging to no end. The audience simply can’t contain their excitement here, screaming and shouting with him along the way, with James even calling for some screams himself in a brilliant moment of call-and-response. After this ten-minute behemoth, the band transitions into a rapidly-changing medley of several songs, all packed into six minutes of time. Where “Lost Someone” was expansive and took it’s time, this medley moves from melody to melody faster than the listener can even keep track of it. In perfect honesty, I don’t like this track nearly as much as I do the rest of the album. Don’t get me wrong, it’s still great. It’s just that all of the musical ideas aren’t given nearly enough time to develop, and while I recognize that it’s a medley of preexisting songs, I just think it would’ve done better if it had given the song snippets a little more room to breathe. The vocals and band are just as captivating as they are on the rest of the album, but this track still stands out as an “alright” point in an album of incredibles. The album ends on a high note with the classic “Night Train,” with its instantly-recognizable brass part and a truly exhilarating bass and rhythm.

And just like that, the album’s over. Like I said before, the only bad thing I can say about this record is that there just isn’t enough of it. It’s one of the greatest live recordings ever put to record, and if you’ve never listened to this non-stop thrill ride before, you’re doing yourself a huge disservice. Let me know what you thought of the album, I’d love to hear your opinions!

9/10 (by the way, starting with this review, I’ve decided to start giving albums numerical ratings out of ten! Let me know what you think about this, I’d really love to know.)

Next Up: Getz/Gilberto by Stan Getz and João Gilberto (1963)